Wood County voters will find candidates from both major parties when they cast votes for U.S. and state senators and representatives, along with one third-party candidate.

Wood County voters will find candidates from both major parties when they cast votes for U.S. and state senators and representatives, along with one third-party candidate. The following are profiles.

In the 116th Congress, Gooden is a member of the House Committee on Financial Services where he serves as the vice ranking member on the Housing, Community Development, and Insurance Subcommittee. Prior to joining the House of Representatives, he served three terms in the Texas House and spent 10 years working as an insurance broker and risk management consultant.

Lance and his wife, Alexa, live in his hometown of Terrell with their son and daughter. They attend Rockwall & Brin Church of Christ.

He graduated from Terrell High School. After earning degrees from the University of Texas in finance and government, he went to work as an insurance broker for energy and energy-related companies, negotiating on their behalf in the insurance marketplace and helping to protect them from lawsuits and other business risks.

Dr. Carolyn Salter, a physician, was elected the first woman mayor of Palestine by one vote. She served two terms. After her tenure as mayor, she remained an active part of the community by serving on not-for-profit boards and participating in local politics.

Salter was adopted and grew up in Odessa and Cushing, Okla. Her dad was the pipeline superintendent for Cities Service Oil Company in Cushing, and her mother was a career school teacher in English, speech and drama and became a school counselor in 1970. Salter attended Stephen F. Austin State University in Nacogdoches and UT Southwestern in Dallas where she got her medical degree in 1981. She was on faculty in anesthesiology for three years at the VA hospital in Albuquerque, N.M. before returning to Texas in Brownwood in independent practice before moving to Palestine in 1991. She has administered anesthesia at local hospitals and practiced general medicine with her husband, Michael Gorby, MD, who is an internist, intensivist and hospice director.

They have one son, Scott, who lives and works in Dallas.

Kevin Hale is a salesman from Dallas and a 2007 graduate of the University of North Texas.

Bryan Hughes graduated from the Baylor University School of Law in 1995 and has a BBA in economics from the University of Texas, Tyler.

His Senate committee appointments include chair of Administration and member of Criminal Justice, Education, Natural Resources and Economic Development, Select Committee on Redistricting and vice chair of State Affairs.

He has served on the board of trustees of the Steward’s Foundation since 1996 and serves on the board of directors of the Texas Conservative Coalition Research Institute. He is an elder of Golden Bible Chapel and a member of the Rotary Club of Mineola, Mineola Foundation, National Rifle Association, Red Cross volunteer and member of Saint Peter’s Episcopal Church.

Spanko was raised in Wood County. She holds two degrees in social work. For roughly a decade, she’s worked for nonprofits, helping families seek medical care and basic needs. From 2016 to 2019, Audrey worked for the Department of Family and Protective Services.

Hefner is a former commissioner of Upshur County. His House committee assignments include Appropriations, Local and Consent Calendars, Subcommittee on Article II and Transportation. He is a board member of the East Texas Council Regional Review Committee and a member of the Hide-A-Way Lake Kiwanis Club, Lindale Chamber of Commerce, National Rifle Association and a member and teacher at South Jefferson Baptist Church. He and his wife Kerri have seven children.

He recently acquired the Watkins insurance agency in Mineola as part of the Hefner Group.

LaWyanda Prince was born in Mt. Pleasant She earned a bachelor’s degree in elementary education, bilingual education and sociology from Prairie View A&M University in 1978 and a master’s degree in education from East Texas State University in 1992. Her professional experience includes working 34 years as an educator (now retired) in Harris and Titus counties. She worked with the Mount Pleasant Independent School District for 22 years.

She is an active member of The Lady Mujaji Social/Civic Club, Democrat Club of Titus County, the Texas Retired Teachers Association and the Unity Community Church. 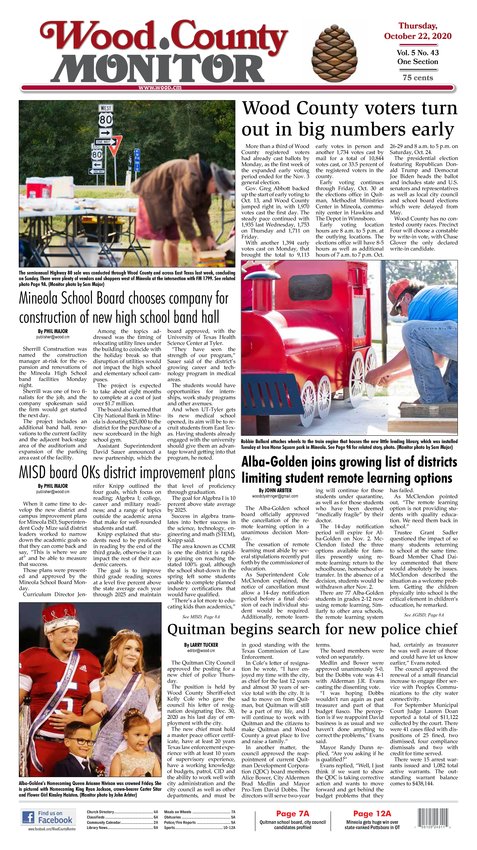