It was a Wednesday afternoon. There was no one expected at the Alba City Park, but taking advantage of the cloud cover, a grandmother and grandfather were attentively watching their young grandson scamper up the climbing wall. Under a covered picnic table, two couples were enjoying a lunch which they had brought with them from a restaurant at Lake Fork.

It was a Wednesday afternoon. There was no one expected at the Alba City Park, but taking advantage of the cloud cover, a grandmother and grandfather were attentively watching their young grandson scamper up the climbing wall. Under a covered picnic table, two couples were enjoying a lunch which they had brought with them from a restaurant at Lake Fork.

For those who haven’t made it to Alba recently, the newly-renovated Alba City Park is worth an outing.  In fact, the park represents not just a quantum improvement for the community but also a clear success story for the city.

In almost exactly one year, the park renovation project went from a city council concept to reality. Last spring the city secured a $78,400 grant from the Texas Parks and Wildlife Department. The grant was configured as a 50/50 grant, meaning that the state would contribute half and the Alba Economic Development Corporation half. After the initial notification, the project went full speed ahead.

Friar commented, “Alba has been gun-ho to get this project done from the very beginning. It is so good to see such passion in a small community.”

A large jungle gym is the big addition to the park. However, many of the old favorites were serviced and maintained. The old jungle gym was also maintained and received an upgrade. A tetherball pole awaits play as do several stand-alone exercise obstacles, and of course, swings.

Timing can be critical in seeing outdoor projects through, and the city took advantage of the park renovation to contract for a new walkway in and around the park.  5W Contracting of Sulphur Springs completed the circuit, providing a quality walking path for all ages. Michael Williams’ contracting crew also recently built a much more extensive path at the Emory City Park.

Alba City Secretary Lindy McCarty enthusiastically offered, “We have received tons of feedback, and the message is always ‘We are so glad you did this’. It is just so refreshing to have families using our park again.”

For a small, but very committed group, use of the park has come in the form of a structured workout regimen. Certified personal trainer Joel Landers has brought his energy and expertise to Alba.

“The classes in Alba have been really gratifying,” stated Landers. He explains that his success is based upon keeping his class size small so as to provide near one-on-one training instruction. Combining cardiac training and circuit training with education forms the basis of his classes.

Presently 35 residents, predominantly female, attend his workouts. Participants range from marathoners to homemakers, and in age from 14 to 71.

“My objective,” summarized Landers, “is to provide positive results at an affordable price and to do this in an enjoyable manner and close to home.”

Landers first approached the city council last summer to describe his business and obtain permission for use of the park. He described the excellent support he has received from the city as well as the local residents.

Landers and his wife, Grace, relocated to the southern reaches of Lake Fork after a long and highly successful career with Coca-Cola. An avid outdoorsman, Landers is enjoying the great outdoors of Wood County. The Forney native also spends much of his free time attending activities of his 10-year old daughter, Ella, an Alba-Golden student.

Credentials earned by Landers include the National Association of Sports Medicine Certified Personal Trainer as well as certification as a Youth Exercise Specialist and a Mental Toughness Specialist. He is pursuing additional education in sports nutrition.

A small number of openings are yet available in his present classes, and people at all stages of life are welcome. His trainees can be seen at work five days a week at the park from 5-8 p.m. During inclement weather, the sessions are moved to the pavilion in Golden.

Exercise classes are only the start of park usage.

According to McCarty, the city has already received queries from Alba-Golden High School on the possibility of allowing the volleyball team to practice in the sand court. Also, plans are afoot for construction of a butterfly garden, designed by students. 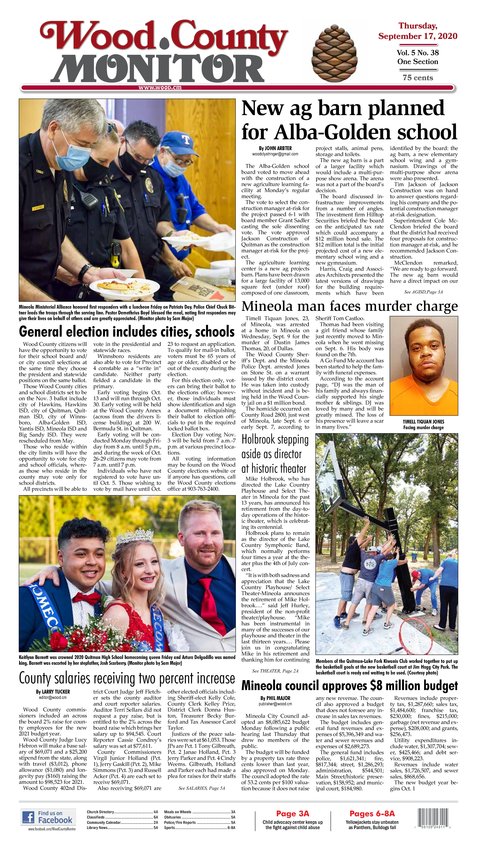