Hawkins Hawks too much for Quitman Bulldogs

The Hawkins Hawks kept their season record clean at 4-0 with a decisive 50-7 win over Quitman Friday night. The Hawk defense and their prolific offense took a 37-0 lead at the half and never looked …

Hawkins Hawks too much for Quitman Bulldogs

Wyatt Hightower (12) of Quitman dives over the goal line for the Bulldogs’ lone touchdown of the night against neighboring Hawkins. (Monitor photo by Sam Major)
Posted Thursday, September 24, 2020 8:54 am
By Larry Tucker
editor@wood.cm

The Hawkins Hawks kept their season record clean at 4-0 with a decisive 50-7 win over Quitman Friday night. The Hawk defense and their prolific offense took a 37-0 lead at the half and never looked back in the victory. The Bulldogs drop to 0-4 for the year with the district race beginning Friday.

The Hawk defense held Quitman to 110 yards on offense with 75 coming on the ground and 35 through the air. Quitman’s Wyatt Hightower fought his way for 77 tough yards on 22 carries, and Gavin Oakes threw four completions with two going to Ty Holland for 31 yards. Hightower scored Quitman’s lone tally in the final quarter on a seven-yard run. Mariano Manriquez added the Bulldog point after.

The Hawks took a 14-0 lead in the first quarter on runs by quarterback Zach Conde and Braden Adams. The highlight play of the night for Hawkins was a wild 90-yard punt return by Jeramy Torres to start the second quarter scoring for the Hawks.

Hawkins went for a pair of scores to take the 37-0 lead at intermission.

Hawkins added two more scores, one on a run by Drew Dacus and the other on a pass from Conde to Brenden Elkins, in the third quarter to extend their lead to 50-0.

Conde had a good night through the air with 7-10 passing for 76 yards and the two TDs.

The Bulldogs start district play Friday night at home against an Arp team that is 0-3. The Tigers have lost to Hughes Springs 42-0, Garrison 36-0 and Waskom 62-14.

Quitman Coach Bryan Oakes cautioned not to be deceived by the Arp record.

“They have a lot of athletic talent. You have to also consider the quality of the opponents they have played,” Oakes noted. “They have played some really solid football teams and you know they are hungry to win one just like we are.”

The annual Golden Sweet Potato Festival went off without a hitch last week, including some great weather, festival board president Grant Sadler said. 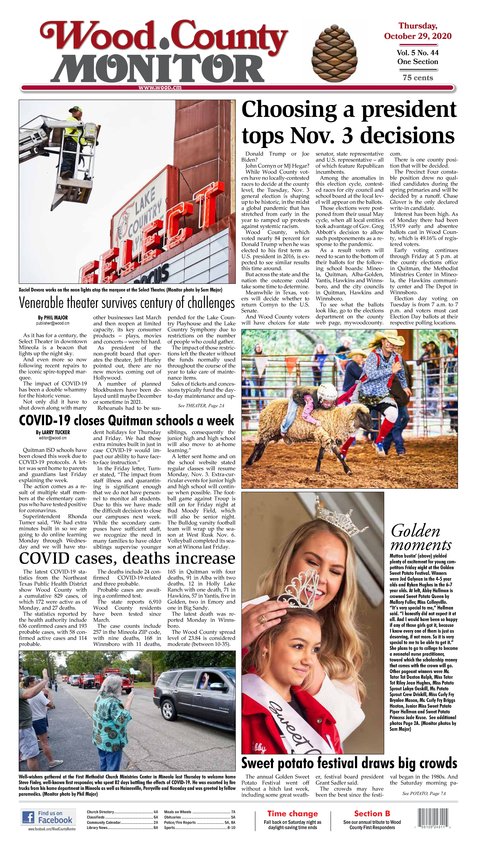