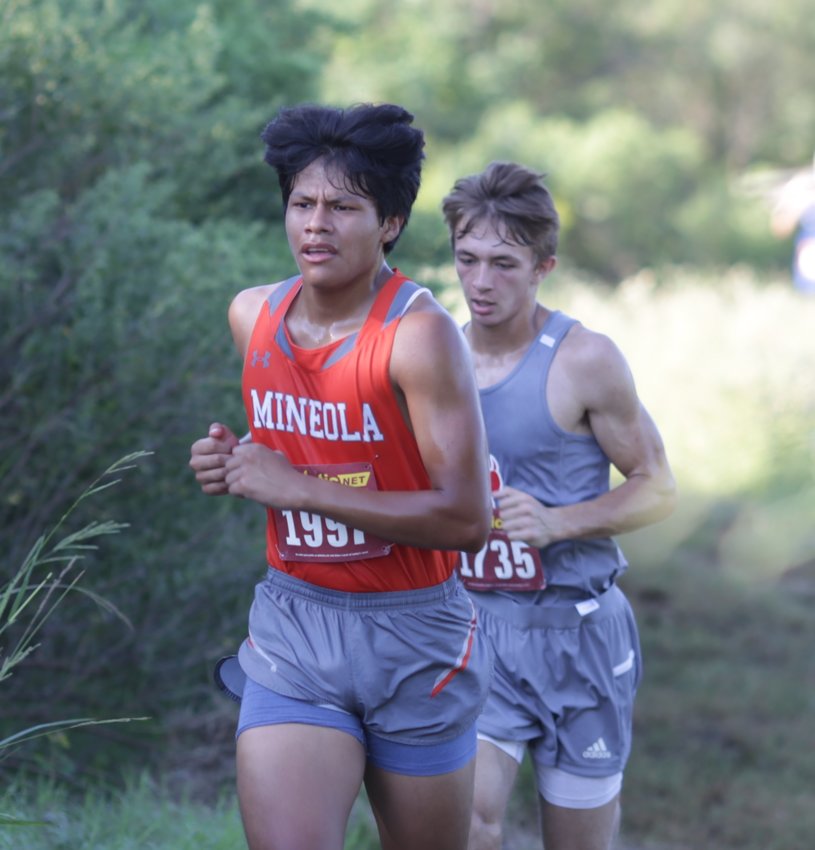 Yesterday at 9:09 AM
A long line of colorful jerseys snaked their way around the pastures adjacent to Rains schools last Thursday at the Rains Invitational cross-country meet. Twenty-eight teams produced over 120 runners … 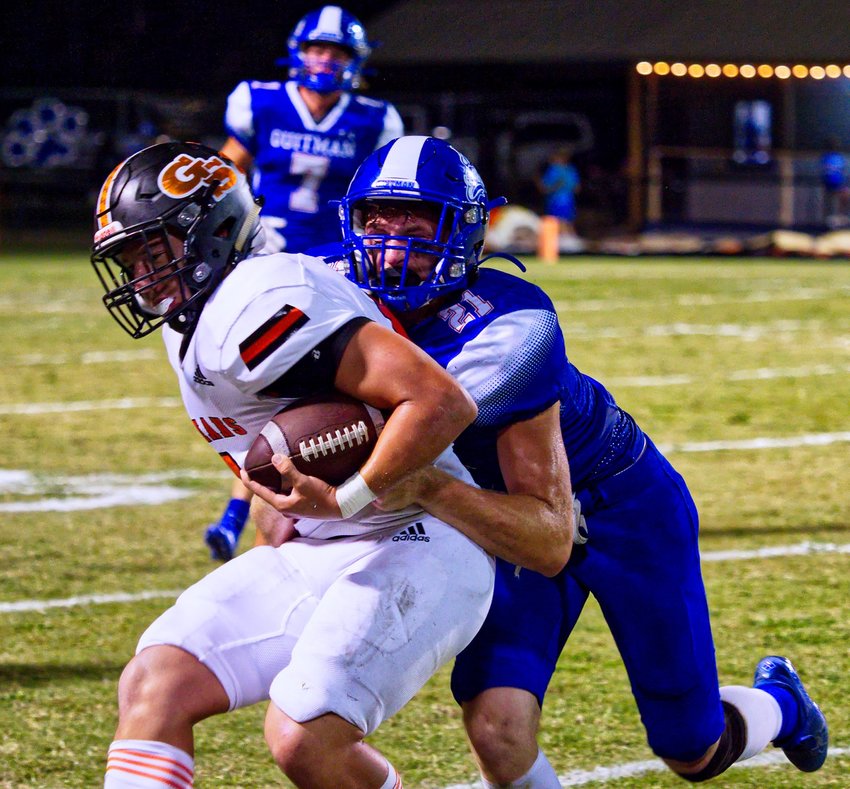 The Bulldogs were overly-hospitable hosts to the Indians Friday, allowing Grand Saline to return home with a 50-13 victory in Quitman’s district opener. 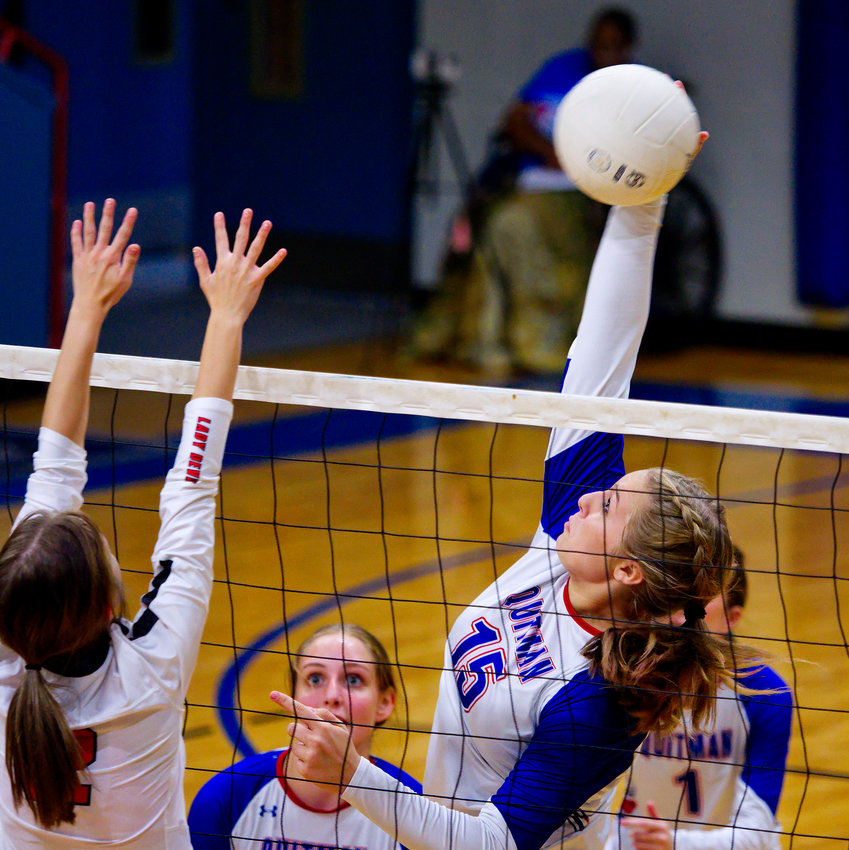 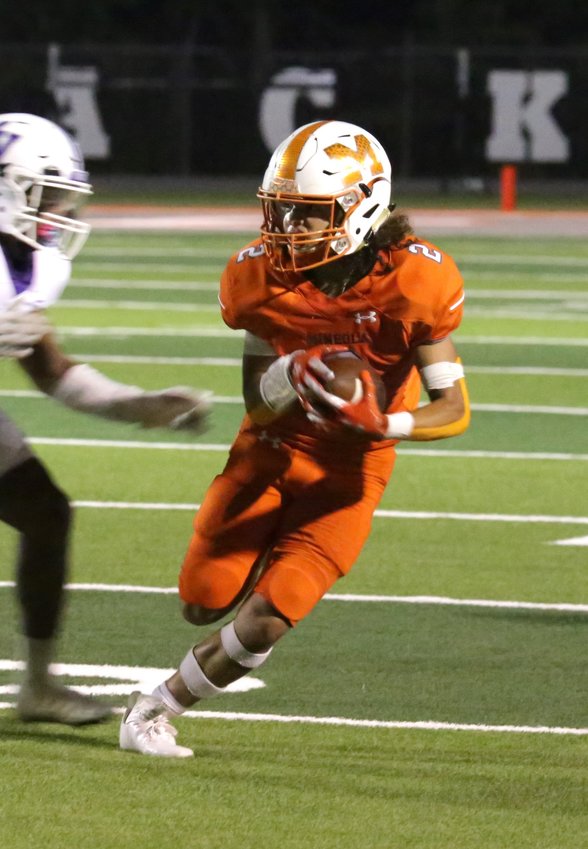 Yesterday at 9:05 AM
The Mt. Vernon-Mineola football game Friday promised to be akin to a heavyweight fight. Largely, it met its billing. Mt. Vernon returned home with a 42-25 win, in a game which belied the final … 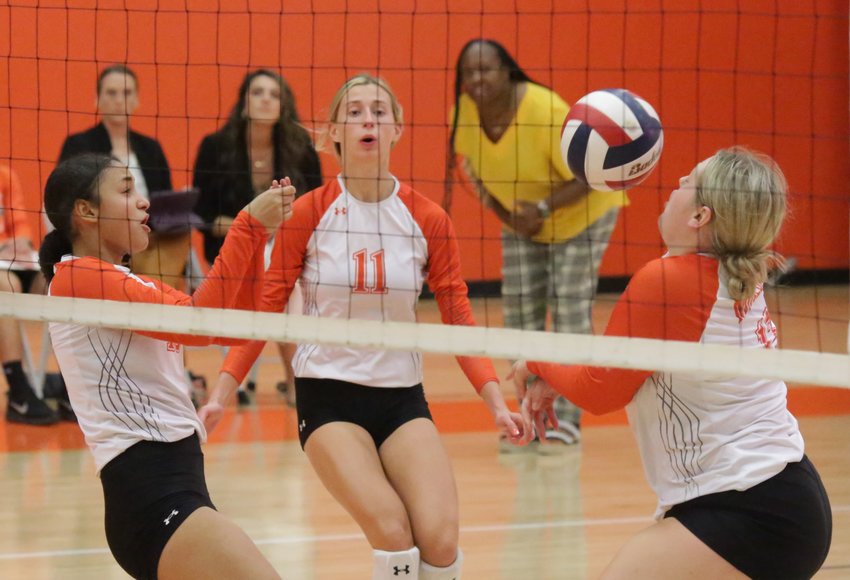 Yesterday at 9:03 AM
Alba-Golden went to Quinlan Boles Friday and came home with a 35-12 win. It wasn’t pretty, but that’s OK. As a sport, there is much about football which requires tightening up after every game. Wednesday, September 21
Every football game presents unique challenges. This past Friday, the challenge posed by the Big Sandy Wildcats to the Alba-Golden Panthers was that the Wildcats had some talented wide receivers, … 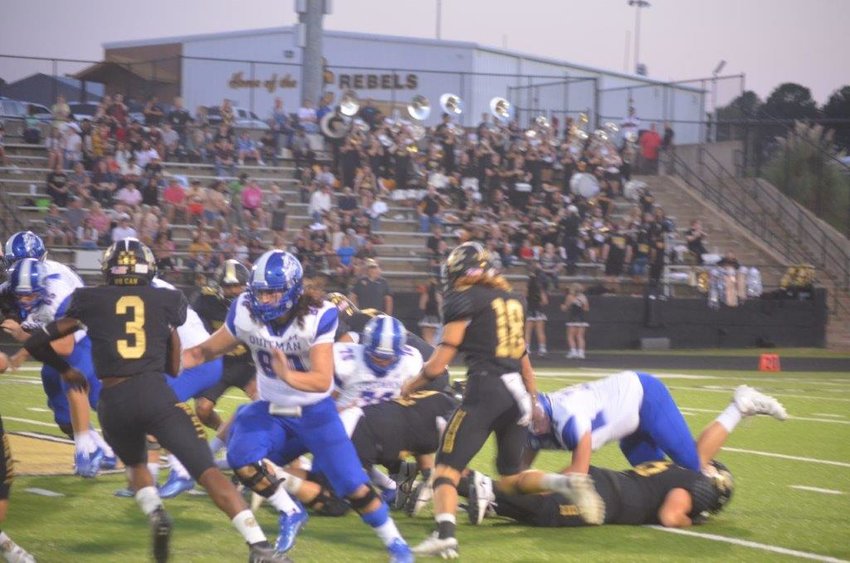 The Quitman Bulldogs survived a late field goal attempt to hold on for a 15-13 win over a tough Ore City team Friday night at the Rebels homecoming. The Ore City kicker had done a great job on … 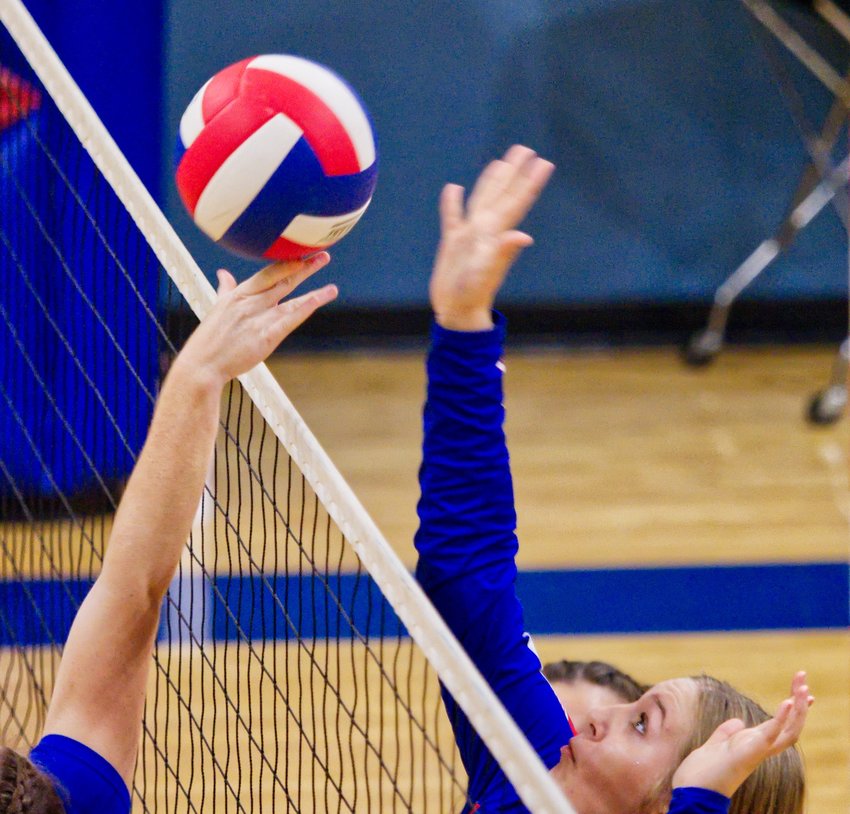 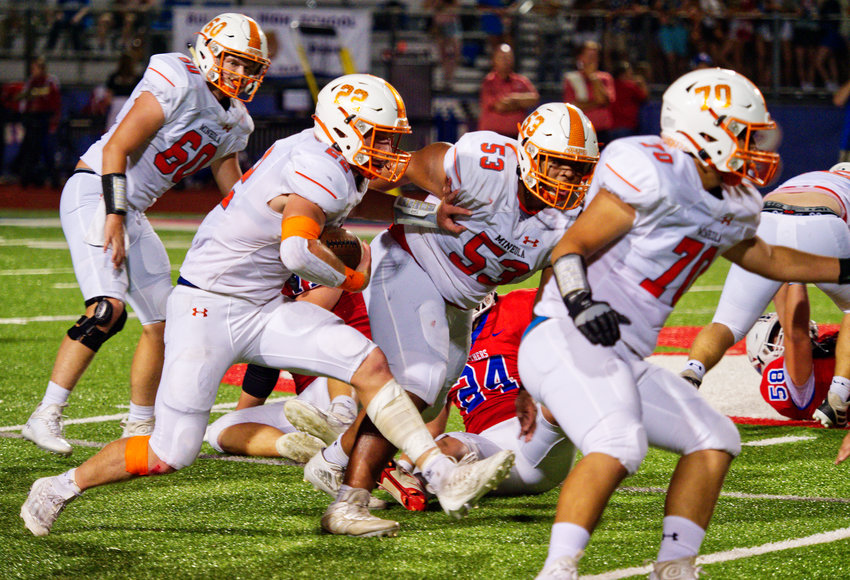 The play was designed to go wide to the right side. It was a direct snap to Dawson Pendergrass. The point of attack was outside the right tackle. At the snap of the ball, the left side of the Bullard line surged up, creating a logjam where the play was supposed to go. Pendergrass took two steps toward the right and hesitated. A split second before two Panther edge defenders arrived at him from each end of the line, he sighted the narrowest crease just to the left of the intended point of attack...

Friday night and time for football 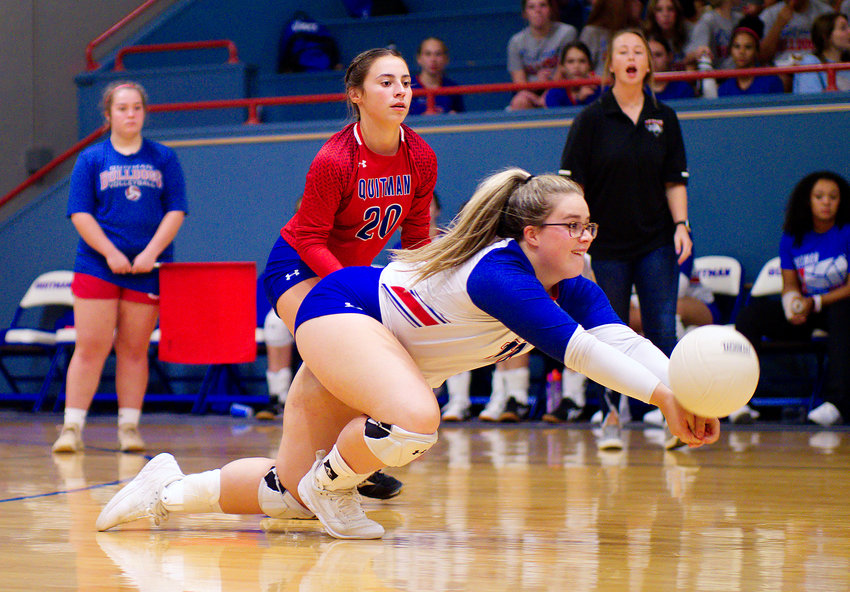 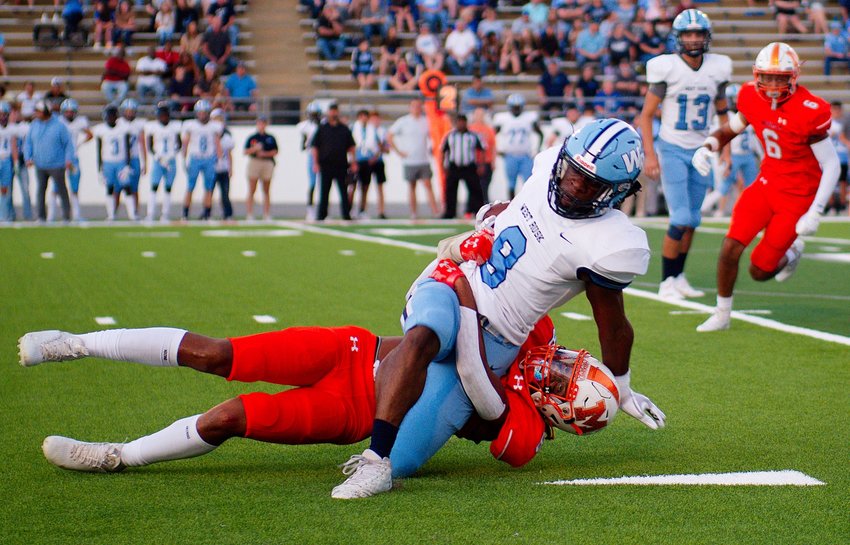 Thursday, September 15
There aren’t many ways to couch a decisive defeat of the home team. The West Rusk Raiders scored touchdowns on seven of their eight possessions Friday at Meredith Memorial Stadium and handed Mineola a 46-13 defeat. 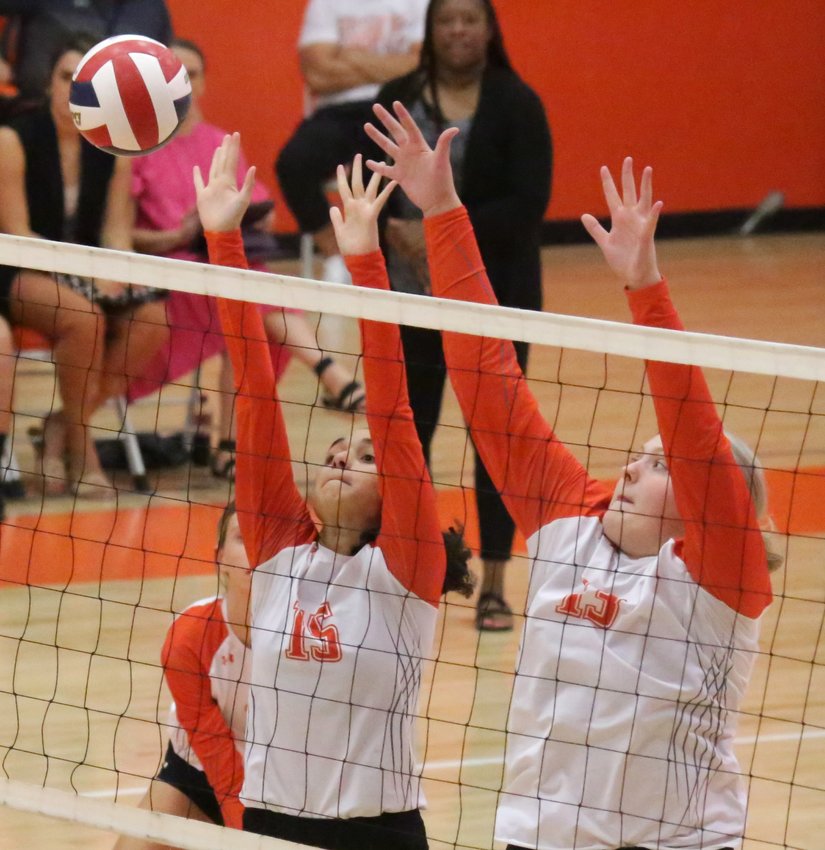 Lady Jackets get win over Cayuga in four games

Thursday, September 15
The Mineola Lady Jackets could be closing in on a banner year. They are days away from beginning district play and seem to have addressed all those particularly-difficult aspects of scholastic … Thursday, September 15
The Alba-Golden Lady Panthers hosted the Brownboro Bearettes Tuesday in the first of four remaining pre-district matches. While Brownsboro easily won the match in straight sets (25-6, 25-14, 25-11), the Lady Panthers got the experience of facing a very good team.

Bulldogs hold off Kemp for second win of season

Thursday, September 15
A tough defense once again led the Quitman Bulldogs to an exciting 20-17 win on the road at Kemp. The offense did their job sustaining drives, using several running backs to pound out the win. … Thursday, September 15
Alba-Golden Athletic Director Drew Webster explained what made this year’s group of Panthers so special. “They have a true appreciation for the concept of team…they are, in a word, …

Thursday, September 15
Mineola sophomore Olivia Hughes is picking up her running career where she left off last spring – leading the pack. Hughes took first place in the 2-mile cross country race at the Yellowjacket …

Friday, September 9
Mineola hosts West Rusk for a non-district battle, Quitman is a long way from home at Kemp and Alba-Golden tries to stay unbeaten and un-scored upon when Clarksville visits. The Lady Panthers had … Thursday, September 8
The Alba-Golden Panthers packed one thing in their kitbag for Linden-Kildare last Friday: intensity. Each play, on both sides of the ball, the Panthers played with a level of intensity which shaped … Thursday, September 8
lin in the Mineola High School gymnasium last Tuesday. The Lady Panthers of Alba-Golden were in town to face the Lady Jackets.  Both teams have had promising pre-district performances this … Thursday, September 8
A 36-point second quarter explosion by Quitman gave the Bulldogs their first win of the season Friday, a 42-8 blasting of Big Sandy. It was also a solid debut for Bulldog freshman quarterback Klayton … Second half propels Mineola to win

Thursday, September 8
The Mineola Yellowjackets overcame a lethargic first half only to have an offensive explosion in the second half and record a 44-34 win over the Hughes Springs Mustangs Friday. Maybe it was a long …

Friday, September 2
This week finds Mineola and Alba-Golden headed east for their football match ups while Quitman has its home opener. Mineola is at Hughes Springs and the Panthers are just a bit down the road at … Thursday, September 1
Quitman dropped a heartbreaker Friday night at New Diana falling 20-18 in a game that the Bulldog defense rose to the occasion, holding the Eagles in check most of the evening. A pair of fumbles and …

Detroit no match for A-G Panthers

Quitman and Alba-Golden battle in scrimmage; regular season gets underway on Friday night

Fall sports season around the corner

Westberry posts a banner year in the circle

The boys and girls of summer

Local athletes miss out on medals at state track meet

Yesterday at 9:02 AM
The 56th version of the Mineola Hay Show continued the strong tradition of support for the Mineola agricultural education program – even if shaking up the format a bit.

Yesterday at 8:48 AM
Wood County Commissioners voted to approve the use of the American Rescue Plan Act funds Tuesday. That $8,845,417 will be allocated as follows...

Yesterday at 8:46 AM
A Mineola city ordinance approved in 1986 to allow large truck parking in residential districts by permit was overturned by the city council Sept. 19.

Yesterday at 8:46 AM
The Quitman School Board named assistant superintendent Chris Mason as the lone finalist to become the new superintendent Monday.

Mason will replace Rhonda Turner, who announced in August that she is retiring Dec. 31 after serving as QISD superintendent for 15 years.

Yesterday at 8:45 AM
“It was a good night at the council, a great day for Quitman,” summarized Mayor Randy Dunn upon completion of last Thursday’s city council meeting. He added that progress had been made on the issue of housing, on lodging and for investment in the city.

The council unanimously approved two incentive agreements between the Quitman Development Corporation (QDC) and real estate developer Scott Johnson. The development is targeted for a 10-acre parcel which Johnson has purchased behind (south of) Brookshires Grocery.
Like what you see?

Many of these photos are available for purchase